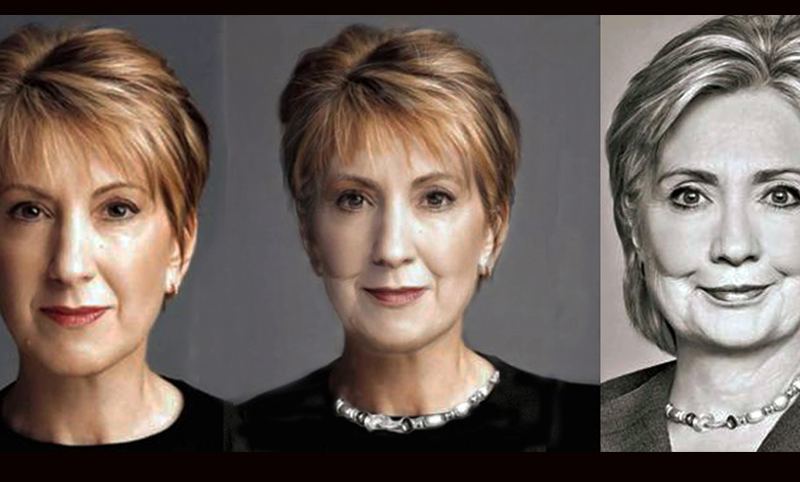 Carly Fiorina looked like the republican version of Hillary  Clinton tonight.  I do not believe she would do anything but create a repulsive cat fight with Hillary should she even remotely get the chance.  It would look like two evil witches going at it.  Both are putting their gender to disgrace.  How does she think she is going to win on a cat fight record?  How does having a Ferguson in the street values and ethics persona make her presidential?

Each time Carly winced her face with eyes squinting and screeched, “I will beat Hillary Clinton”, I saw a vision of  a deranged Fiorina running toward her opponent with a two by four in one hand and her claws  sharpened like Freddy Krueger on the other ready to scratch, with a distorted face like a mad woman and screeching – “It’s mine!  All mine!”  Then I heard Hillary cackling with eyes bugged out like Gollum of Lord of The Rings, and yelling, “It’s my precious, mine!”

Well, if that is what you want to watch, vote for Carly. They are both cut from the same cloth. Both would not talk with Putin, and both would continue nation toppling, and both would make a big mess of things ushering in WWIII.  Neither would create jobs, both will lie about doing so.  Fiorina did again tonight stating that she created a lot of jobs in her executive past as though no body would remember her 30,000 plus job loss and failed corporate record.

Fiorina got a zing into Trump belittling his meeting with Putin, and proudly announced she had a real meeting.  Whatever that meant.  She listed a bunch of Muslim national names that she also met with as though Trump hadn’t dealt with his share of foreign nationals in his life time and overseas projects.  She made a fool of herself to the informed.  She obviously is counting on the uninformed gender vote.  But, she’ll have to fight Hillary for that.

Kudos to Trump for not taking the bait and staying away from Golan eyeing her precious.  Let Gollum be Gollum was a good idea.  However, in defense of Trump and Russia, I am sure he made effective use of his meeting with Putin and I am sure they both respect each other and I am sure they are on good terms.  Especially, when if you will recall shortly after that meeting,  the Mayor of Yalta, Crimea, Russia wrote an opt ad welcoming Trump to visit them when he wins?

“We are following the elections process in your country with great interest,” said Yalta Mayor Andrey Rostenko  in an open letter to Trump published on the city’s website. “We like your election program and we like you as an extraordinary person.”

I don’t think they said that about Fiorina.  Nope.

Donald Trump a hit in Russia? You wouldn’t think so. But the mayor of Yalta in Crimea has wished the maverick Republican success in the 2016 presidential election and invited him to visit the city, hinting that a street may be renamed after him.

“We are following the elections process in your country with great interest,” Yalta Mayor Andrey Rostenko wrote in an open letter to Trump published on the city’s website. “We like your election program and we like you as an extraordinary person.”

The mayor added: “After your victory in the election you plan to establish friendly relations with President Putin – and this is an excellent decision.”

Rostenko said that Trump’s approach to foreign policy was very similar to Russia’s, and he saw this as positive. “You want to be friends with China, and we want the same thing. You support Russia’s effort in fighting international terrorism and so do we. We have a lot in common and this is a fine excuse to arrange a meeting,” the letter read.

The mayor reminded The Donald that Yalta has the only street in the Russian Federation named after a US president – the Franklin Roosevelt Street. He wished Trump victory in the polls and suggested that “one day Yalta might get one more street named after the US leader who made an invaluable input into the improvement of relations between our two peoples.”

Earlier this week, Trump praised Russia’s anti-terrorist operation in Syria, noting that Moscow is “bombing the hell out of ISIS” because President Putin wants to prevent terrorism spilling into Russia. Trump also criticized US Middle East policies as “failed” and leading to a “total mess” in Iraq and Libya.

Trump, a 69-year-old billionaire real estate mogul, entered the US presidential race in June, seeking the Republic nomination. He is currently leading in the polls.”

They were excited about Trump and even suggested the possibility of naming a street after him.   I do not recall Russia saying they endorsed Fiorina?  They have Trump.   So, as Fiorina pulls the wool over the eyes of the uninformed…what she really did was look small and wicked.  I’m sure Russia was watching.

But, worse of all…did you see her face?