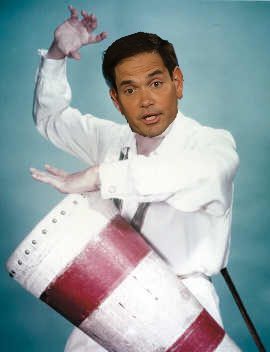 Little Rubio ‘Ricardo’ where are your conga drums?  You could do much better banging away on those drums than you can banging away in the Senate that you have told us all you hate because nothing gets accomplished.  At least nothing is done the way you had it playing in the reality show in your head.

Definitely America does not want to risk a little Rubio taking the Presidency and then deciding that isn’t his thing either.

May I suggest you take up playing the congas?  That will be a thing that America can buy tickets to watch and not feel threatened by your absentee voting record nor by your immigration dream act gang of eight involvement.

I am sure you will find the thing you were meant to do.  It just doesn’t appear your thing is to be President of a Nation that is full of Americans.  You appear to want to represent illegals, therefore you need to apply for a position with Univision or some other organization that can utilize your true heart desires.  You seem to miss the point of what legal immigration is all about.  Bye bye and I don’t mean American Pie.  I mean Rubio.