“THE NEW WORLD ORDER HAS FAILED.  NOW IT WILL BE  NEW RULES OR A GAME WITHOUT RULES!” Putin 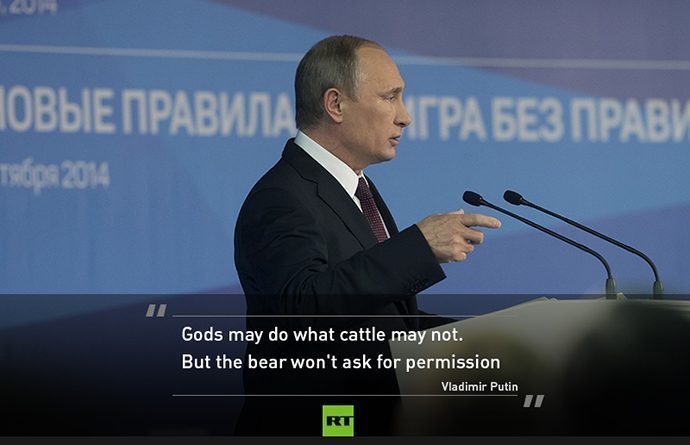 Putin delivered a rousing speech that changes the rules of the establishment elite’s game of political global domination!  International politics  has enjoyed playing their secret games full of false speeches of national sovereignty  going through lip service with no action to improve any nations concerns.  Talks for show, all designed to give the illusion of maintaining international concerns and respecting national sovereignty only to hold secret meetings and self serving deals behind closed doors. 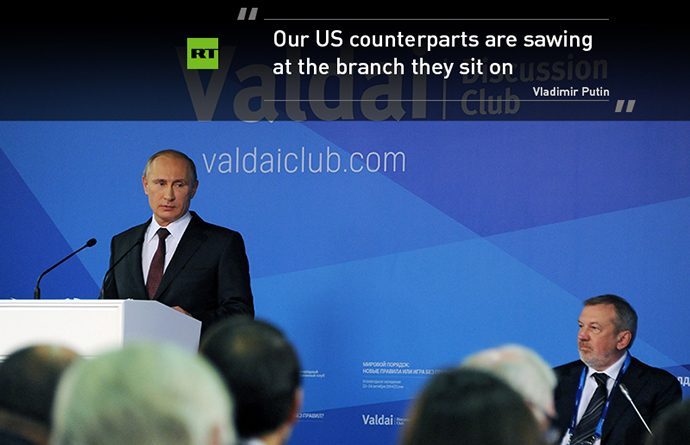 Putin has had enough of the lies and Russia being played a fool by fools. He has declared the game is over and pulled a Trump by speaking directly to the people about what exactly has been taking place and how.


The Russian blogger Chipstone summarized the most salient points from Putin’s speech at the Valdai conference in Sochi a few days ago,  as follows:
1. Russia will no longer play games and engage in back-room negotiations over trifles. But Russia is prepared for serious conversations and agreements, if these are conducive to collective security, are based on fairness and take into account the interests of each side.
2. All systems of global collective security now lie in ruins. There are no longer any international security guarantees at all. And the entity that destroyed them has a name: The United States of America.
3. The builders of the New World Order have failed, having built a sand castle. Whether or not a new world order of any sort is to be built is not just Russia’s decision, but it is a decision that will not be made without Russia.
4. Russia favors a conservative approach to introducing innovations into the social order, but is not opposed to investigating and discussing such innovations, to see if introducing any of them might be justified.
5. Russia has no intention of going fishing in the murky waters created by America’s ever-expanding “empire of chaos,” and has no interest in building a new empire of her own (this is unnecessary; Russia’s challenges lie in developing her already vast territory). Neither is Russia willing to act as a savior of the world, as she had in the past.
6. Russia will not attempt to reformat the world in her own image, but neither will she allow anyone to reformat her in their image. Russia will not close herself off from the world, but anyone who tries to close her off from the world will be sure to reap a whirlwind.
7. Russia does not wish for the chaos to spread, does not want war, and has no intention of starting one. However, today Russia sees the outbreak of global war as almost inevitable, is prepared for it, and is continuing to prepare for it. Russia does not war—nor does she fear it.
8. Russia does not intend to take an active role in thwarting those who are still attempting to construct their New World Order—until their efforts start to impinge on Russia’s key interests. Russia would prefer to stand by and watch them give themselves as many lumps as their poor heads can take. But those who manage to drag Russia into this process, through disregard for her interests, will be taught the true meaning of pain.
9. In her external, and, even more so, internal politics, Russia’s power will rely not on the elites and their back-room dealing, but on the will of the people.
https://speisa.com/lovegra.php 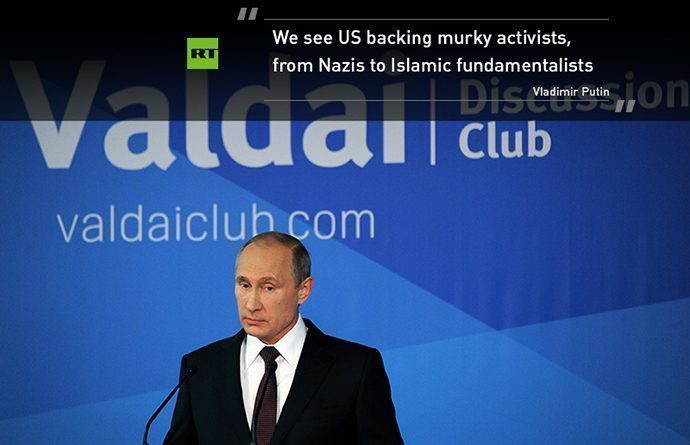 Vladimir Putin has called out the western elite and stomped on the toes of Obama and his entire administration calling the US the empire of chaos. Including all his hench persons…including Hillary and Kerry as he already has in the recent past.  I am sure he is also including all the yes persons in congress sitting on the floor and all those in the senate who encourage it!  The building up of ISIS forces is no longer a secret, nor are the drone wars and all the deceit and inhumane destruction encouraging Islamic refugee invasion throughout the western world, the TTP trade acts and all the bad deals like nukes to Iran.  Their game  is over
Dianne Marshall