America’s greatest fear of a world police is now at the door and banging  loud! 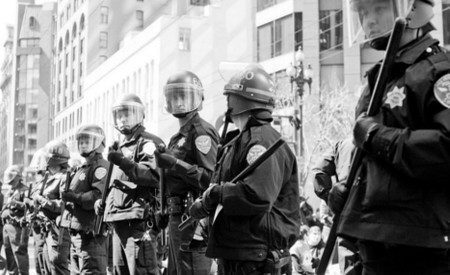 This is the article I wrote in the Spring then sat on it until Trump came on the scene and exposed the illegal immigration problem.  It was originally a three part article and after submitting it, I asked Out Loud America not to publish it yet.  I had cold feet as I was really going out on a limb accusing the administration of such devious of acts and revealing the steps being taken to lead America into the establishments new order of policing for the 21st century. Especially when making the claim that INTERPOL would have the honor of doing so, and especially since no one else was making such claim but me.

After Trump exposed many things, I updated the article and submitted it as a two part series.  Then low and behold, today the plans to have INTERPOL police America  has made the internet headline breaking news. Please read about the steps that were taken to reach this triumphant moment for the establishment elite and their global governance plans in this two part article, then do your part to expose this evil act!

Let’s look at the facts. Many of the sanctuary cities are democratically or RINO run and have high crime rates such as Miami, Detroit, Chicago, Oakland, San Francisco and although better now, in the past New York was one of the worst. These have been set up in previous administrations starting in the 1980’s for a reason, but maybe not for the reason we have been told. Let us look at why they were established and why past administrations upheld and supported them?

Many sanctuary laws were passed in the 1980s when many churches and other organizations sought to provide safe harbor to Mexican and Central American immigrants fleeing violence at home. In some cases, local jurisdictions took such measures upon themselves when the federal government refused to grant some groups formal refugee status.

Ronald Reagan was president and the border crisis was becoming more and more political. He made the border crisis and illegal immigration the key basis of his re-election campaign which won him another four years in office.

Arguments for and against these sanctuary cities were the same then as they are today. Many argued that sanctuary laws provided a safe haven that encouraged law-abiding immigrants to work with the police without fear of deportation, while opponents argued they provided safe havens for criminals. Both arguments sound legitimate enough. But, I am connecting dots here and see a more sinister plan in step with all the other plans in place to destroy America from within.

It appears that sanctuary cities have laid the ground work to bring about a police state without a shot being fired, except through manufactured (AKA-false flag) events. Bear with me, as I show you how decades of planning connect to many events. The most recent being the San Francisco murder of Kathryn Steinle by Illegal Immigrant Sanchez. Trust me it will clear up why Feinstein and Boxer, along with Clinton are trying to wash their hands of the city’s mess while the state of California as a whole is remaining silent.   You will also see how racial riots, border crisis, such as Fast and Furious, and illegal immigrants are necessary evils.

It appears the sanctuary controversy was always designed to create and to use these sanctuaries when the time was right. They are participants in a grand scale design to bring about a new policy of policing and stripping away the rights of the people.

Let me say it another way…

The NWO Elite who control the political puppets have plans to use these cities to support future plans to bring about a new method of policing and erase our nation’s borders. The roadmap to this can be found in Agenda 21 sustainable development docs for the 21st century and a new world order. Before you quit reading and call me a conspiracy nut. Let me explain how I came to this conclusion.

By removing language from President Reagan’s 1983 Executive Order 12425, this international law enforcement body now operates -on American soil beyond the reach of our own top law enforcement arm which is the FBI, and is immune from the Freedom Of Information Act (FOIA) requests.

AS A PUBLIC INTERNATIONAL ORGANIZATION ENTITLED TO

By the authority vested in me as President by the Constitution and the laws of the United States of America, including section 1 of the International Organizations Immunities Act (22 U.S.C. 288), and in order to extend the appropriate privileges, exemptions, and immunities to the International Criminal Police Organization (INTERPOL), it is hereby ordered that Executive Order 12425 of June 16, 1983, as amended, is further amended by deleting from the first sentence the words “except those provided by Section 2©, Section 3, Section 4, Section 5, and Section 6 of that Act” and the semicolon that immediately precedes them.

Again, I repeat, this E.O. grants the International Criminal Police Organization (INTERPOL) rights on American soil that place it beyond the reach of our own law enforcement agencies, such as the Federal Bureau of Investigation (FBI). Source:

This was a bold move in lock step with the United Nations New World Order Sustainable Development Goals for the 21st Century. Pure and simple.

Now let us look back to the 1980’s at the bold promises of Reagan to secure our borders that got him re-elected. Add to the bold plans of sanctuary cities to safeguard illegal immigrants until this bold immigration reform was established. It is starting to look more like a bold move planted during the Reagan administration, innocently fueled by the conscience of well meaning people. The same administration that brought us REX 84. (revised martial law plans that allowed the president and the attorney general to declare martial law at any time during a real or manufactured (false flag) crisis by the stroke of both of their signatures. The same documents that created FEMA camps to incarcerate illegals and US citizens) Please google it later. Sorry Reagan fans, I am not saying he did this for evil, I am just stating a fact. He probably did this with good intentions especially since we were in the midst of cold war with Russia, the same he called Star Wars. It was the dawn of space based weaponry – a new weapons program that exceeded the imagination of man. I know this is true for even today people do not believe we have such toys that can destroy an entire city in seconds, nor do they believe we can modify the weather creating monstrous disasters, and cause tectonic plate shifting (earth quakes).

Now to connect the dots.

This generation has witnessed an onslaught of attempts to create racial divide. More in the Obama administration than any administrations before it; which lead us to the Ferguson riots.

In the wake of the Ferguson Riots (Real event or False Flag?) it appears that Obama got the green light to strike. I say strike for as at each interval when we are in a crisis he magically pulls out a legislative act that contains thousands and thousands of pages to present to congress for approval. Or he does it his way and signs an executive order accompanied by the same thousands of pages and implementing it before the ink on his Executive Order has a chance to dry.

Now is a good time to pause and remember that the new “SMART” plans of sustainable development for the 21st century are to create the crisis then give the answer. (google it for yourself).

Next, connect the series of seemingly odd police shootings against blacks. Then note all of the crazy types of abusive police brutality videos on You Tube. Brutality toward everyone including children and animals. This has been going on for years. Remember cops aren’t wearing cameras yet? Many of these videos come from surveillance in the police stations themselves. Or so we are told to believe that, even though the odds of a police station putting their wrongful actions on the internet are a trillion to one. Some are real, most are propaganda.

Now let’s connect the death of Freddy Gray in Baltimore to all this. Anyone who followed along could see there were a lot of unanswered questions, false witnesses, lies, and discrepancies. The officer was tried and found guilty by the media, Jessie Jackson, and Al Sharpton while he was still in the hospital. The internet was flooded with false flag accusations and the outcome of the trial outraged the black community and organizers bussed in professional rioters and gangs like the black panthers to destroy.

Now fast forward to when the Ferguson riots ended and the smoke was cleared which brings us to December 18, 2014. This is the day President Barack Obama signed an Executive Order establishing the President’s Task Force on 21st Century Policing. (Now where have I heard 21st century before? Task Force? Oh yea, sustainable development NWO.)

In this executive order, US cities will be policed by the Federal Government. (sound scary yet?) The Chair of his Federal Police Task Force Study Program was Philadelphia Police Commissioner Charles Ramsey who also serves as President of the Major Cities Chiefs Police Association and Mayor of Philadelphia (also a Sanctuary city), and Laurie Robinson, professor of Criminology, Law and Society at George Mason University and former Assistant Attorney General for DOJ’s Office of Justice Programs.

Now comes the interesting part, Baltimore Mayor Stephanie Rawlings-Blake, the same mayor who proudly announced at a press conference that she gave orders for the police to stand down and give rioters room to destroy (which by the way was one of the “smart” ideas the police task force came up with to try) is one of President Obama’s appointed mayors on his Task Force on 21st Century Policing.   Did I mention that Baltimore is also a sanctuary city? It is.

I will fast forward a bit more. Today, both Ferguson and Baltimore are proud members of Obamas Federal Task Force on 21st Century Policing.

It is now beginning to look like Baltimore Riots were a live theater test run. They can do this with REX 84 and with Obama’s Executive orders. Not to mention Obama Care. Yes, Obama Care – see link below.

Oh wait a minute….REX 84 Martial Law was replaced by an Executive Order from President George W. Bush. Oh he just made one tiny inclusion. “Once In Control – Martial Law Will Stay.” He signed this very quietly in May 2007, although it was published in the Washington Post. Please check these links.

We are stuck in a giant web like a fly and their plan has more layers than an onion. Each layer uncovers another and another and build upon each other to establish a borderless North American Union . I will end part 1 and allow you time to digest this information.   Please read part 2 to see how this all connects. Believe me, you don’t want to miss it.

Click link below to read original article in Out Loud America: