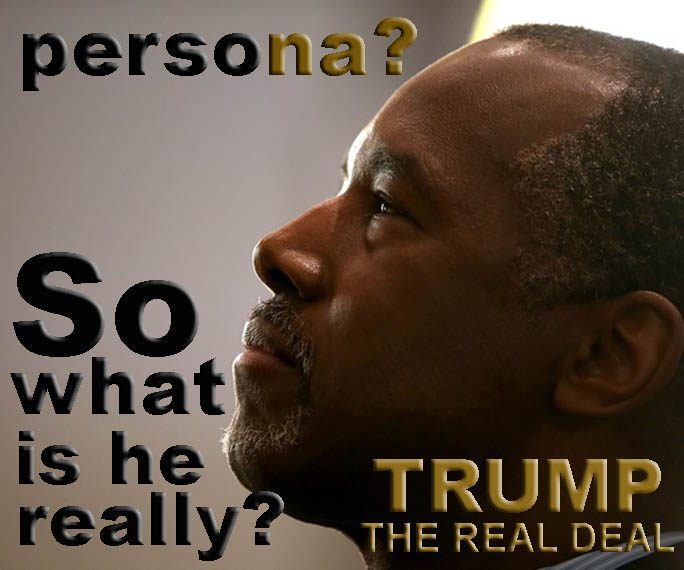 Let your yes be yes, and your no be no.  If you aren’t sure, then say you aren’t sure. If you want it both ways but want to be held blameless then answer as Carson does.  That will work for a while, but sooner or later someone will start connecting all the dots.

On the campaign trail Carson’s views on Fetal Tissue Research were much different than the views he holds as part of the Bioethics Research Team.   Which is the team  who investigates the decision making of professionals regarding the ethical acceptability of using human fetal tissue from elective abortion for research or therapy.

“To willfully ignore evidence that you have for some ideological reason is wrong. If you’re killing babies and taking the tissue, that’s a very different thing than taking a dead specimen and keeping a record of it.”

When he was asked if Planned Parenthood should cease its fetal tissue distribution, Carson said he still favored defunding the group, but would not call for the end of fetal tissue research so long as the fetal tissue was available.

So what is his stance?  Yea or nay?

When asked directly if fetal tissue research should be banned, or if it was immoral, Carson said no.

So how does he justify this?  In an interview Carson in his calm mannered and humble way answered, “Bear this in mind about pathologists, regardless of what their ideology is, when they receive tissue, they prepare the tissue. They label it. They mark how it got there. Regardless of whether it’s from a fetus or someone who’s 150 years old, they bank them in tissue blocks. Other people doing comparative research need to have a basis. When pathologists receive specimen, their job is to prepare the specimen. They have no job opining on where the tissue came from.”

I’d like to see the tissue from the person 150 years old. Wouldn’t you?

Dr. Carson himself said in July that Planned Parenthood’s defense is “spurious” because there is “nothing that can’t be done without fetal tissue.”

Yet in a past interview with Eric Bolling for the O’Reilly Factor in discussion of the racist origins and purpose of Planned Parenthood, Bolling brought up the claims from his comments to the Washington Post that Carson had engaged in fetal research.  Dr. Carson answered that he had “not actually worked with fetal tissue.”

Carson blamed the left for putting out that information because his name appears on an article in which the pathologist compared specimens that he delivered from the operating room to some fetal tissues, in an attempt to decide which way the cells were being differentiated.  Carson stated, “You know, my part is to do the operation and supply the tissue. At that point, I move on to the next operation. So, to suggest that I’m in the laboratory actually doing the research, or retrieving fetal tissue, is nothing but propaganda.”

So what is Carson’s logic?  He has said, “This has everything to do with how it’s acquired. If you’re killing babies and taking the tissue, that’s a very different thing than taking a dead specimen and keeping a record of it.”

Just where is the line drawn? It appears Carson can justify and or deny anything at any given time. What about the person who works in Planned Parenthood and just has to box up the parts?  They aren’t actually a harvester, nor are the a researcher?  Do they ever feel guilty?  After all they are neither, they are just acting in a warehouse capacity I guess?  So that’s okay?

And what about all the people who get by products of fetal tissue in medical products, vaccines, etc.  I have even read it is a cola enhancer.  Be that true or not, it has been reported.

So by his own admission (at least for today),  Dr. Carson is a fetal tissue harvester?  Not an actual fetal tissue dissector? At this point I have to sarcastically quote Hilary for he sounds just like her, “What difference at this point does it make?”  After all whether the specimen comes from Planned Parenthood or Carson’s own harvest, he is on the Bioethics Research Team and of course he’s not really bragging about that right now on the campaign trail.  He’s being very humble.

A recent news story from POLITCO, By Katie Glueck brought to light that Dr. Carson has referred women for abortion. Furthermore, his pro-life stance is shown to be a bit muddled when it goes beyond his personal  stance.

“Carson’s history on the issue is shaped by his medical background: Decisions he made decades ago — about referring women carrying fetuses with genetic defects to doctors willing to perform abortions, and conducting research using fetal tissue — came in the context of making complex medical decisions. But those are calls the candidate, who is running as ardently anti-abortion, stands by today, positions he argues are not out of step with being personally pro-life. And they are positions his communications director defended in an interview using language favored by advocates for abortion rights.

And Carson also said this, ““My commitment to protect innocent life goes back decades,” he writes on his campaign website. “For years I have helped raise money for a wide spectrum of faith-based entities that assist expectant mothers with the birth of their child by providing a variety of valuable, pro-life services.”

So again???  It is confusing as to what he believed decades ago when he did both.

“He believes in quality medical care, No. 1, and secondly, he believes in people making their own decisions based on facts and information,” said Carson communications director Doug Watts, when asked whether Carson stands by his previous decisions to refer women whose fetuses had genetic defects to doctors who provide abortions. He does, Watts said.”
Read more: https://www.politico.com/story/2015/08/ben-carson-abortion-stance-121456#ixzz3pdDLMdIe

So is Carson lying or just trying to have it both ways?  Seems that he has agreed to both sides and publically on national news said both.  My next question will be this – Is he related to Hillary Clinton?

A good and quick read from a (once upon a time) Carson supporter: https://catholicstand.com/dr-ben-carson-the-good-the-bad-the-ugly/