BREAKING NEWS - 10,000 SYRIAN REFUGEES BEING DISPERSED ACROSS AMERICA. IS YOUR TOWN LISTED? - The Marshall Report Skip to the content 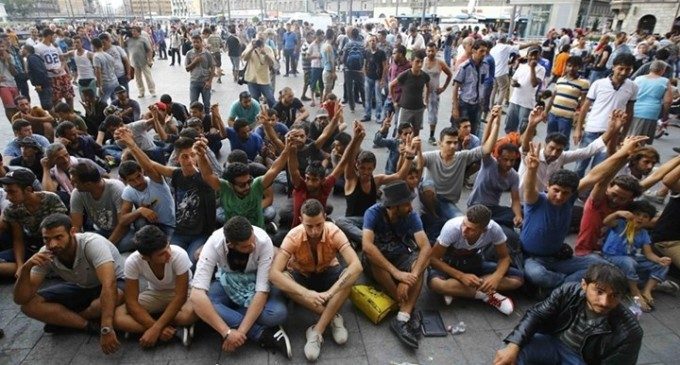 America are you ready for the next batch of able-bodied ISIS (also called refugees) coming to your home town?  They are here in New Orleans.  Ready to deploy.

Looks like Iowa will be getting their fair share in Des Moines!  Chicago will get the mother load in Illinois along with bus loads  filtering to cities down state.  California is taking the cake with their lions share.  Florida is getting a bit bombarded as well, and Louisiana ….sorry you are getting a bunch.  Click on the link below and see if your city is among the 180 across America doing their dutiful act?  Are you all ready for the Ferguson riot winter or maybe it will wait until spring when a few more hundreds of thousands land on our shores?  Fear not, Obama has enacted INTERPOL to police our cities.  He thought of everything to keep you safe.

Here is how it works:

The 10,000 Syrian refugees are first flown to the United States, according to the French news wire Agence France-Presse, with the State Department paying the International Organization for Migration (IOM) for the airfare.   News reports have it they are already here in New Orleans.

They will be dispersed across 180 cities listed in the link below.  Then they are to be aided within the first 30 to 90 days in settling and finding employment in the area. (Did you get that folks?  They get jobs! They will have a government team and Catholic charity helping them get jobs!)

After approximately 90 days, refugees are no longer eligible for the State Department-funded support that they were receiving through migrant and refugee services. However, they are able to join support programs through the Department of Health and Human Services. (This is where your social security funds will be going to. The same funds they say you should give up because it is going broke. This is just one of the many ways they spend it. However their arrival will boost Obama care enrollees, but it is free to these able-bodied male refugees, so that means you pay again.)

Additionally, it is unclear how much the screening process for the 10,000 Syrian refugees will cost American taxpayers. (So not only do you have non English speaking Allah Akbar screamers in your land, you have to pay to have them here and to screen them so we feel safer?)  Is your head hurting as bad as mine yet?

The State Department spent $1.1 billion resettling people from around the world in the country last year. That’s about $16,000 per person.  So belly up to the government high bar and welcome the next round of illegal happy hour.  They are now called refugees, but just as Captain Hook, from the famed tale of Peter Pan, when the crocodile was near, all he ever heard was the ever dreaded evil sound of…..tick tock…tick tock…and that, my friends, is the same sound my ears are picking up…. tick tock…tick tock.

Is anyone wondering what will happen when the sex craves start like it did in Germany? In Sweden? In Austria?  Does anyone consider how many girls will get raped? Killed for dressing like an infidel?  And what happens after 90 days if the jobs don’t come through or they don’t like them because they aren’t good enough?  What happens if Moline Illinois doesn’t have Halal food?  I mean, really?  Are you ready America?

Are you ready for all the newly issued drivers licenses to non speaking, and non reading English refugees?  If you think this is all a bad dream.  You are correct.  It is a bad dream, it is not the American dream at all.

BREAKING: Syrian Refugees From The Muslim World Are Arriving In New Orleans

Can you imagine what it would be like if we gave our returning veterans as much care and thought as we are giving those our vets fought against?