Captain David, and Patty Cummings are stepping out from their daily lives to warn others of the toxic water because it is killing sea life and making people sick, and some are dying.  Whether it is a slow death of cancer, or a long term autoimmune disorder like asthma and respiratory issues, or muscle spasms and soreness, skin disorders, rashes and flesh eating virus….somebody has got to stop the runoff of toxic waste from the fertilizer plant and all the farmers like big sugar who use the phosphate ridden toxic nonbiodegradable product.

People need to be aware that Red Tide does not naturally kill mammals like dolphins, manatees, and sea turtles weighing 300 plus pounds.  It doesn’t kill horseshoe crabs, whale sharks, and 500 pound groupers.  It just doesn’t.

Captain David has lived in Florida his entire life. From the time he was a small child he has lived and breathed the life of a true born fisherman. The crisis in the Florida water and dead sea life hits deep into his heart and he won’t rest until something is done that takes care of the root of the problem. His passion and commitment to stop the toxic run off stems from his strong Florida roots. He’s not a fair weather type captain who gets a license, buys a boat and takes a chartered group out and back again for cash and when times get tough, simply leaves or finds another place to take his boat. Captain David is a fighter for sea life, wild life, nature, eco systems, and people, but what motivates him above all things is his 8 year old son, Matteo, that’s the future he’s fighting the hardest to save. 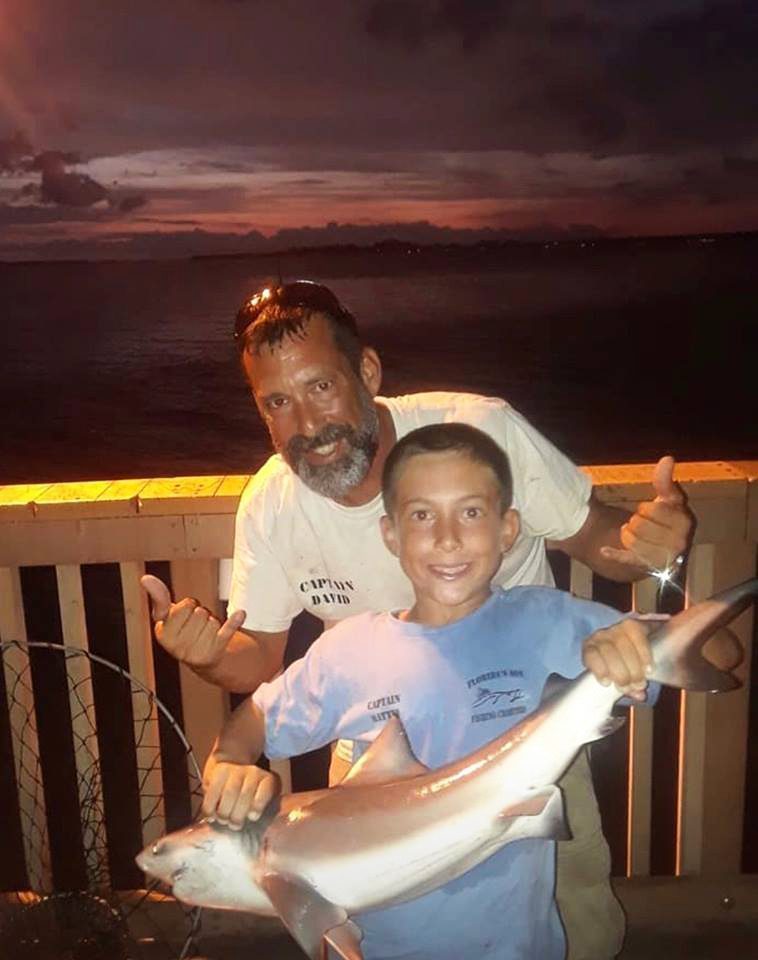 Captain David, “As a kid, I loved to fish and always went fishing on my own because I didn’t have a dad. I grew up without a dad and one day when I was about 8 years old, some older guys from the neighborhood took me out fishing on their boat. It was my first time ever on a boat. That day we caught snook and red fish. I remember when we got back I got emotional and started shaking, and crying. One of the guys, his name was Tim Fisher, who was one of my giants, asked, “What’s wrong? What’s wrong?” I told him, nothing’s wrong. Somethings telling me that I’m going to do this the rest of my life. And I’m telling you right now, as an 8 year old kid, I looked him straight in the face and said, you’re never gonna see me do anything but this. This is what I am going to do forever.”

Now you might think an 8 year old kid was just going on because he had a dream come true by going out in a boat. But this wasn’t so with Captain David. He fished every day since that day and runs deep sea charters with 40 years experience.  He knows the waters like people know the rooms in their house.  He knows where the fish are and understands the eco system and nature.  When he says things are not right.  They are not right.

Patty Cummings is a business owner, manufacturer, and the mother of four, with two left at home, 12 year old twin boys who love to fish and love the water.   She is the author of a #1 best seller on Amazon, that didn’t get celebrated yet because she was busy finding out what was taking place on her shorelines.

“When I was told my book hit #1 on Amazon, I thought that was great”, said Patty, “But, my heart was focused on finding out where all the birds went and what was killing the manatees, dolphins, puffer fish and sea life.  Last week I should have been celebrating with my friends and signing books, instead, I was combing the beaches trying to figure out what in the world was happening to our water and sea life. I kept searching the beaches and asking questions.  On top of that, I made it into the office every day and got supper for my boys.  It was all surreal.  I had to know why the sea life kept dying every day. I love the water, who doesn’t love to get in the ocean and feel the waves?  Everyone should have the opportunity to see the ocean at least once in their lifetime. And everyone has the right to drink clean water.  Everyone. That’s what we are standing up for!” 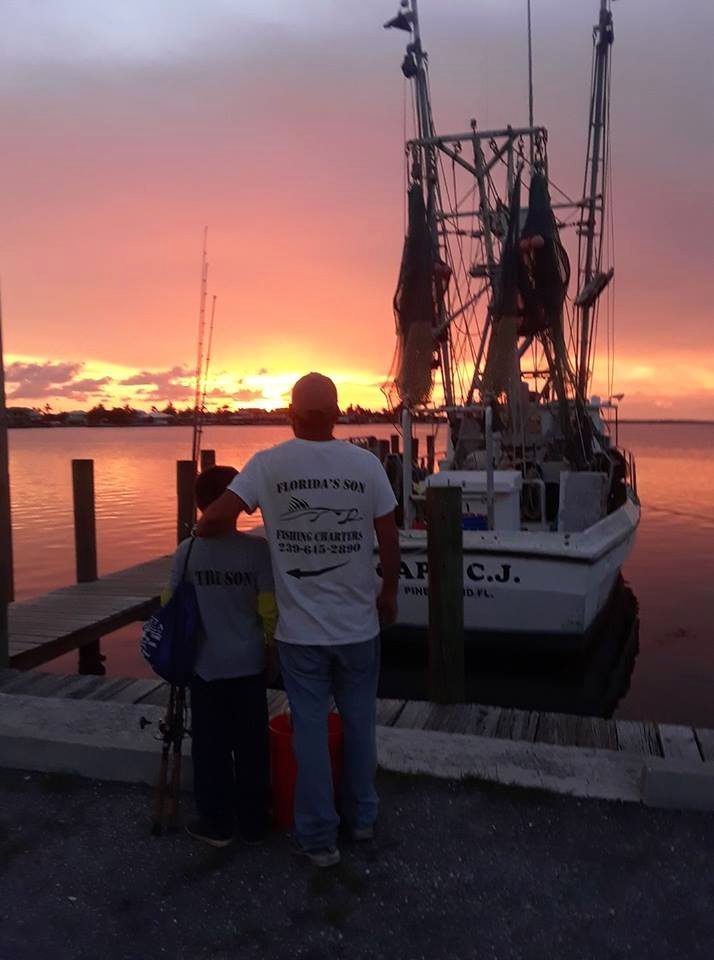 Captain David, has not been able to take any one out to fish for six weeks.  His business has taken a $30,000 dollar loss, but he is more concerned with the future for his son Matteo and the sea life than with the money. “My fishing charters are relationships that I built with people over time. These aren’t my clients and my customers, these are my friends.”  Stated Captain Dave. “There’s people all over the world that have a picture of me and them holding a fish with a giant smile. And when they talk about Florida they talk about Captain Dave. They talk about how Captain Dave doesn’t give up, how Captain Dave will find the fish and make it happen. I’ve spent 40 years of just doing this every single day, and to see the dolphins die and the manatees die, and all our fish gone and to see my son sad because we can’t go out knowing we live on the water, and have a boat. I worked really hard to have this life for him and I got to tell him no. That is unacceptable to me because I don’t want to say no anymore. I’m tired of saying no. Even in this couple of months of saying no…every time I got to tell him now it kills me. It hurts my heart. Every single time.”

Patty met Captain Dave at town halls and through creating awareness of the dying sea life.  They both shared the cause of sharing the truth of the magnitude of the problem in their back yards. They both believe that if something isn’t done fast the consequences will be devastating and people will get sicker.  Many older people are dying now from respiratory failure from the toxic spores in the air.

Captain Dave is passionate and so is Patty.  Together they are making people in Lee county sit up and take a good strong look at what is in their back yards.  Many are shocked and had no idea it was this bad.

Captain Dave has made it clear that the people in Florida are not going to be ‘collateral damage’ for any one.  He isn’t going to sit down and be silent about what is taking place in the water he lives for and loves. “Looking out back and seeing the algae in my canal and seeing algae on my boat and dead fish. Everyone of these dead fish is a natural resource that has been depleted. So every time we see these it breaks our hearts, but what hurts me the most is it’s all the work and all the time and all the memories. It’s everything that I’ve created for my son, that’s just going to be gone and I will not accept that. I will not try to understand that. I’m just gonna fight back. I’m not going anywhere. I’m not moving!

“We’re going to appreciate and understand and maybe this is just a lesson that we’re learning now. But, I’m telling ya, I’ve learned it and I’ve asked God to fix it now. And anyway that he can use me, I will follow. And that’s my fight!

Patty Cummings is made of the same grit and sea water that flows through Captain Daves veins.  She is out on the beaches asking questions and creating awareness. Her passion for the sea life was felt around the world by  RTL International News out of Greenland who saw one of her videos. She got a call out of the blue from Holland on Tuesday and the next thing she knew they were coming in on Thursday.  When they arrived, she asked Eric Mouthaan of RTL World News, Netherlands why he chose her to talk to out of all the people he could have asked. He told her it was the passion in her voice as she made the discoveries on the beach for the first time. They knew this was real and she was the one they wanted to talk to. They came to Florida and Patty connected them with Captain Dave who took them out in his boat and showed them what was going on in the opaque black water that was once clear and blue. Patty then took the news team out to areas in Lee county for a first hand look.  They will be releasing their news story over the weekend and hit their European affiliates Monday.  Hopefully it will create more awareness based on the real facts.  Time will tell.

Captain Dave had a lot to say, but he ended on this note. “You’re never going to question where my views are, because I’m gonna tell ya. In a room full of people, when you lie, I’m gonna tell on you. Because I’m that guy. There’s no body holding strings on me, there’s no body telling me what to do, where to go, what to say. I’ll call you out for the world to see. The guy that can speak the loudest is this guy!”

Patty Cummings agrees, it is time to call them all out and demand real answers. She is missing the smell of the sea salt air and the sound of the seagulls flocking the shores. Pelicans are another favorite.  How about you? What would the sea air experience be without the nature that was made to surround it.  The camera man from Greenland said it best, “It’s death in paradise”.  Patty has faith the birds will return and the people will stop the dumping of fertilizer, and toxic waste into the water ways and the land will heal before it is too late.