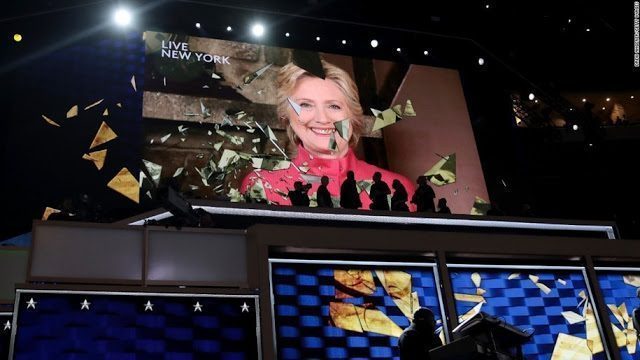 Hillary breaking through the glass ceiling was a satanic ritual of huge proportions.  The earth’s firmament being a protective heavenly dome, is the same dome Nimrod and the people of Babylon built the tower to reach up into the heavens (firmament) and make war with God.  It is the very same firmament or dome that keeps man earthbound.  No one can travel past the firmament – which scientists  secretly call a glass ceiling as they laugh at us all behind our backs.  We are told it is the Van Allen radiation belt that keeps us from going into space….at the same time we are told we are on Mars and have been to the moon but now they have all but abandoned the space program???  What ever it is, it’s not for us to know. It’s all a big bang.
Hillary’s proclamation of the number of cracks she put in that glass ceiling during her 2008 campaign run for the presidency was not just a slogan, not just a metaphor.  It was a literal attempt to break through and make war (as we have witnessed from her past war mongering, the Clinton body bags and all her deceitful actions as secretary of state.)  World chaos has engulfed the earth under her reset ambitions.  The world stage is now set in motion for the final defiance against God and all humanity.
https://www.youtube.com/watch?v=8__ZMG2qoE8
The DNC Hillary incantation video began with showing the succession of presidents who as acting puppets (willing or unwilling) for the ruler of this world were tools for the principalities and powers of darkness to defy the God of heaven and his people. Leading up to an evil glass shattering  nod to the Oligarchs  revealing the final ritual to usher in the harlot riding their beast .  It is a fact that evil and corrupt men and women have willingly helped to plot and position the entire chaos humanity is now experiencing on a world scale.
While there were many presidents past, Hillary chose to highlight a procession starting with Gerald Ford, Jimmy Carter, Ronald Reagan, George H. Bush, Bill Clinton, George W. Bush, Obama all the way to breaking the glass ceiling and placing Hillary as the next president.  Why?  Because all the work of the past administrations starting from 1972 at the earth summit (where the final plans were laid out) have worked in sync to bring the world to its’ final stage of their coveted new world order.  Their evil desire to bring all nations under one rule has come.  Or so they all believe.
So why start with Ford?  Enter Hillary whose idol is Saul Alinsky. Remember evil always gives us clues- boldly and proudly,  then sit back and laugh at our ignorance.
Could it be for Hillary it is personal? Remember,  Nixon was facing impeachment charges for destroying tapes, of which Hillary was falsifying documents for the law firm she worked for presiding in the case.
https://www.youtube.com/watch?v=Wuzw65mlerE
Nixon stepped down from office to avoid charges making Ford the 39th president of the USA.  There is a big story here but they have only shown us the clues as they sat back and laughed.

Or could it be that when Nixon attended Bohemian grove he was disgusted at the rituals and didn’t play their games?

All we the people know is how bad he was….why?  The media told us so. Let’s look at the Archives from the Richard Nixon Library and see his speech at Bohemian Grove. Nixon’s Bohemian Grove Speech (full)
Some highlights  of the Address by Richard M. Nixon to the Bohemian Club1, San Francisco, July 29, 1967.
My fellow Bohemians and our guests…
“One striking impression stands out after months of travel to major countries: We live in a new world. Never in human history have more changes taken place in the world in one generation.
It is a world of new leaders. True, De Gaulle, Mao Tse-tung and Chiang Kai-shek are still with us; but Churchill, Adenauer, Stalin, Khrushchev, Nehru, Sukarno—the other giants of the post-war period have all left the world stage.
It is a world of new people. One-half of the people now living in the world were born since World War II. This presents at once a problem and an opportunity for peace. Because, as one Asian Prime Minister puts it, the new generation has neither the old fears nor the old guilts of the old generation.
It is a world of new ideas. Communism, Marxism, Socialism, anti-colonialism—the great ideas which stirred men to revolution after
World War II have lost their pulling power. As the Shah of Iran says—“the new generation is not imprisoned by any ism.” The young people in all countries on both sides of the Iron Curtain are groping for a new cause—a new religion. If any idea “turns them on” it is a new sense of pragmatism—“what will work.”
“Because we live in a new world, many of the old institutions are obsolete and inadequate. The UN, NATO, foreign aid, USIA were set up to deal with the world of twenty years ago. A quick trip around the world will show how different the problems are today.”
“Finally, let us look at American prestige:
Twenty years ago, after our great World War II victory, we were respected throughout the world. Today, hardly a day goes by when our flag is not spit upon, a library burned, an embassy stoned some place in the world. In fact, you don’t have to leave the United States to find examples.”
“It is time for us to recognize that much as we like our own political system, American style democracy is not necessarily the best form of government for people in Asia, Africa and Latin America with entirely different backgrounds.”
“In this context, the tragic events in Detroit take on a new meaning. This was more than just another Negro riot. The looters were white as well as black. We are reaping the whirlwind for a decade of growing disrespect for law, decency and principle in America.
Without sanctimonious moralizing, let’s look at some hard facts. Our judges have gone too far in weakening the peace forces as against the criminal forces in this country. Our opinion-makers have gone too far in promoting the doctrine that when a law is broken—blame society, not the criminal. Our teachers, preachers and politicians have gone too far in advocating the idea that each individual should determine what laws are good and what laws are bad and that he then should obey the law he likes and disobey the law he dislikes.
In the aftermath of these tragic events everyone will have a solution. Some will say we need more laws. Others will say we need more law enforcement. Others will say we need more money for cities, housing, education and welfare. Each of these approaches deserves consideration and some should be adopted.
But in the final analysis there could be no progress without respect for law. There will be no respect for law in a nation whose people lack character. We need a national crusade to build American character in home, church and school. Above all, we need examples of character from our great men.”
As you can see, the Nixon narrative on foreign policy was not in line with the doctrines of those who at the earth summit set out the guidelines for sustainable development agenda 21 new world disorder presented by Maurice Strong.  Earth Summit 1972
But then again, we must remember Nixon never had the blessing of the Bohemian boys club.  Nixon won the election by only 500,000 votes.  It was one of the closest elections in U.S. history.  His challenger Vice President Hubert Humphrey was more in line with what the Oligarchs wanted.  It was also an election of a strong third party.  Because of the strong showing of third-party candidate George Wallace, neither Nixon nor Humphrey received more than 50 percent of the popular vote.  Nixon campaigned on a platform designed to reach the “silent majority” of middle class and working class Americans. He promised to “bring us together again,” and many Americans, weary after years of antiwar and civil rights protests, were happy to hear of peace returning to their streets.

Is it no wonder he was impeached?  And why did we suddenly land on the moon when Nixon was president in 1969?  Why didn’t he attend the historical launch to the moon? What was Watergate really about?  Who was behind the entire fiasco?
Now that we understand more clearly today how the establishment oligarch club works…these are legitimate questions. But more importantly, we must see who has been pushing the agenda since the days of Ford.  This was revealed by Hillary at the DNC convention and what they were telling us is that NOW THEY ARE READY!
It is time for Donald J. Trump who will be the most vital president in the history of America for we are indeed hanging on by a thread that the oligarchs are slashing their swords at.  This is why the propaganda is rampant.  We must all remember one important thing – GREATER IS HE THAT IS IN ME THAN HE WHO IS IN THE WORLD.  PRAY AMERICA PRAY!
Dianne