American Refugees In FEMA Camps - Islamist Refugees In Apartments? - The Marshall Report Skip to the content 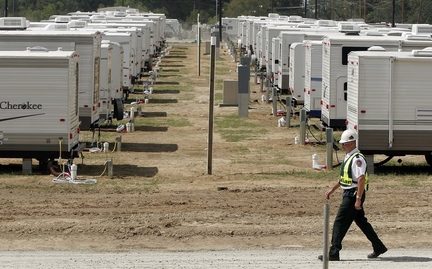 With Hurricane Katrina, American citizens were labeled by the Bush administration as refugees.  They put them in FEMA camps.  Many are still in these camps.  No one inside these camps were allowed to enter or exit without ID and permission.  They were watched constantly.
Now, in spite of the fact that we still have citizens in FEMA trailer camps (many toxic), and many in FEMA placement camps in geographical areas in America that we don’t know about, and the fact that we have tent cities for citizens who have lost jobs and homes……..WHY IN THE WORLD IS OUR GOVERNMENT ALLOWING TO TAKE IN ISLAMIST REFUGEES and put them up with cash, apartments and welfare?    Shouldn’t we be taking care of our own crisis victims and veterans first?
And why haven’t the refugees that have already been received been placed in FEMA camps like Hurricane Katrina victims were?
It is all upside down and backwards by design.
https://www.youtube.com/watch?v=zLQrAQsERuc