FT. MYERS BEACH, AND CAPE CORAL FLORIDA, JULY 31, 2018. This is Part 1 of 2.  The story is long and the rabbit hole is so deep we will have to just start right here at what we are seeing today.  Right now we are watching people wake up with a dose of hard reality.  The water is toxic and sea life is dying and not a fly or vulture going near any of it!  The beautiful sandy white shores of Ft. Myers Beach look like a toxic grave yard for sea life!  All surrounding shorelines in South West Florida are turning into the same surreal picture.

Above, on the left are dead fish.  Yes, dead fish.  On the right is the assumed reason for the dead fish….green algae.  However something strange is going on….read on and see….what can it really be?  Part 1 is to show you the problem.  In part 2 we will explore the problem and look at real solutions. 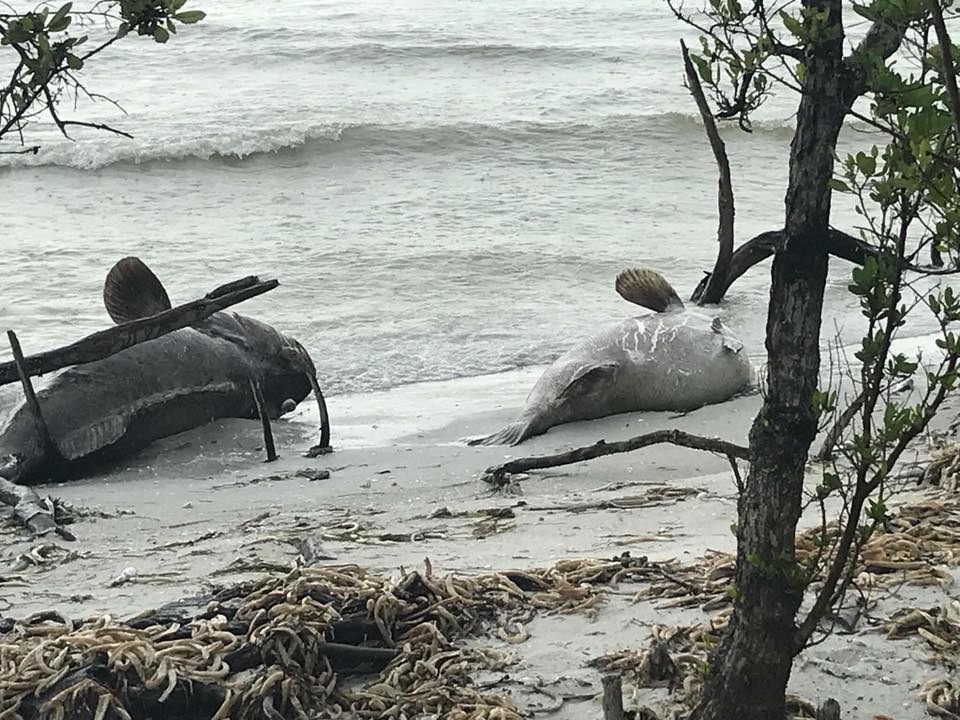 The Wildlands Project, of Agenda 21 Sustainable Development comes to mind.  This is a very big problem in Florida and almost all the shore lined states.  It’s called “dead zones” and they can make it sound very complicated and actually quite boring.  So boring most people just go home and know “there’s nothing here to see … now move along.”  I say, WAKE UP AND LOOK AT WHAT IS TAKING PLACE!  Don’t fall asleep at boring forums with robotic spokespersons sent with gag orders to pacify the crowds who care!!!  It’s time to find out for yourself what is going on.

The Cape Coral Yacht Club hosted a public forum with a spokesperson from the Army Corp of Engineers for the for Cape Coral residents. The forum was coordinated by Gloria Tate a concerned member of  the Government Affairs Committee (GAC).

The results of the forum left most believing they were not heard, they were pacified, most all agreed their questions were not answered.  While others protested holding signs up outside. It wasn’t long and the consensus was that nothing was going to get done unless the people took charge themselves.  One man who didn’t get to ask a question told others that the answer was to use natural fertilizers, and to pipe the water out into the deep Atlantic where nothing would be harmed.  He said that was a viable answer and it does sound viable.  All speaking out seemed to agree on the side (quietly) that it was the sugar cane growers behind the mess and it was told they have big bucks riding in Washington, DC and Jacksonville, Florida – favors and politics as usual. But others had bigger questions like, is our water safe to drink of which the spokesman for the Army Corp of Engineers could not answer that question.  Nor could she answer how bad it was going to get.  She also stated in the beginning of her talk that because of her government position she can not talk about a lot of things people wanted answered.  With that being said, the words “Next question….” take on a very moot purpose.

Later, an older gentlemen tearfully shamed the TV camera crews and other press for not taking their cameras outside to docks and filming footage of four dead Manatees being pulled in from alongside the docks. One of the Manatees was still alive and struggling to move. 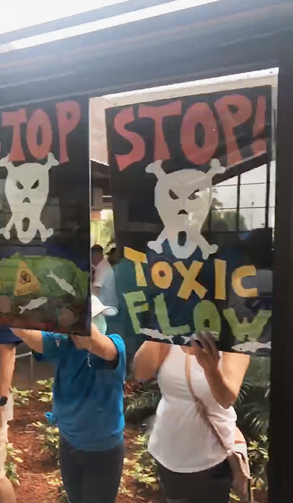 Outside the town hall people were not as content to oblige the nonsense answers as those who were inside.  It appears many were fed up with the run around and came prepared to express how they really felt.

Signs that expressed they knew the water was toxic stood out the most.

Many were shouting but overall, it was very peaceful.

The comments got heated up after that as everyone was in agreement. 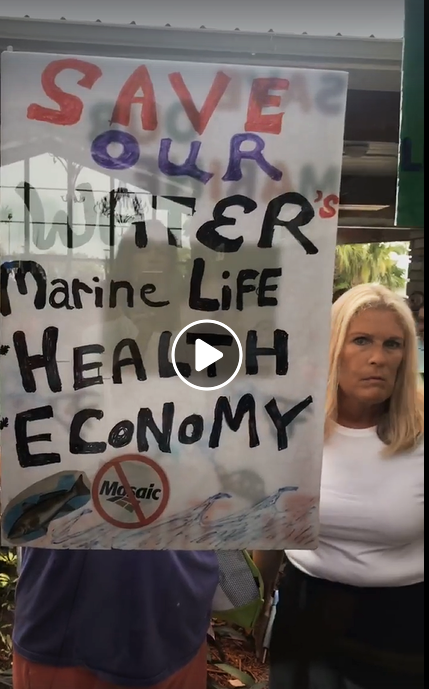 It seems the sign on the right had a circle with a cross through a company logo.  Has anyone heard of Mosaic?

Mosaic is one of the world’s leading crop nutrition companies with a focus on potash and phosphate, two of three most vital nutrients and a chief cause of algae bloom.

Remember the name.  It is the name that is killing your sea life!

They call it “VITAL NUTRIENTS”  and that can be very deceiving.  For most of the phosphate nutrients are toxic to small animals and children.  But, when we hear the word nutrient…we think of something healthy. Right?

We don’t associate that word with toxic waste.  So when you read about the nutrients eaten by green algae, you don’t think toxic waste.  Learn what they mean when they use words and your eyes will be opened.  The big toxic dump isn’t a dump of good nutrients.  It is a phosphate dump that is toxic.

There is a bigger story than algae, and the whispers from those in the know at the forum just kept getting louder and louder and soon became a strong voice with many shouting out their ideas of the real problem and it was not the algae!

I thought whale sharks stayed way out and in the deep… this sure looks like there could be a more sinister reason for this ocean grave?  It isn’t looking like the – so called “red tide”. What is being sprayed and what is being dumped?

There are no birds in sight, and not a fly to be seen on any of the dead fish.  Not a one.  Normally there would be a lot of buzzing.

Then there are people who are getting sick, skin peeling off, and other icky things who have unknowingly swam in the water and gotten a condition.  How many will be swept under the rug and how many will make the news?

Does President Trump know about this?  Will he fly over and access this long pressing issue?  Okeechobee needs addressed and so does the sugar cane and the pesticides that equal agent orange toxic levels!

Left, right, center left, center right, what direction is the incoming coming from? It’s way out of control and all illegal.  Where is the law of the land?  Has it all gone out the window or is it being held hostage by the lawless ones?  At what point will law and order be enforced for those who follow it? 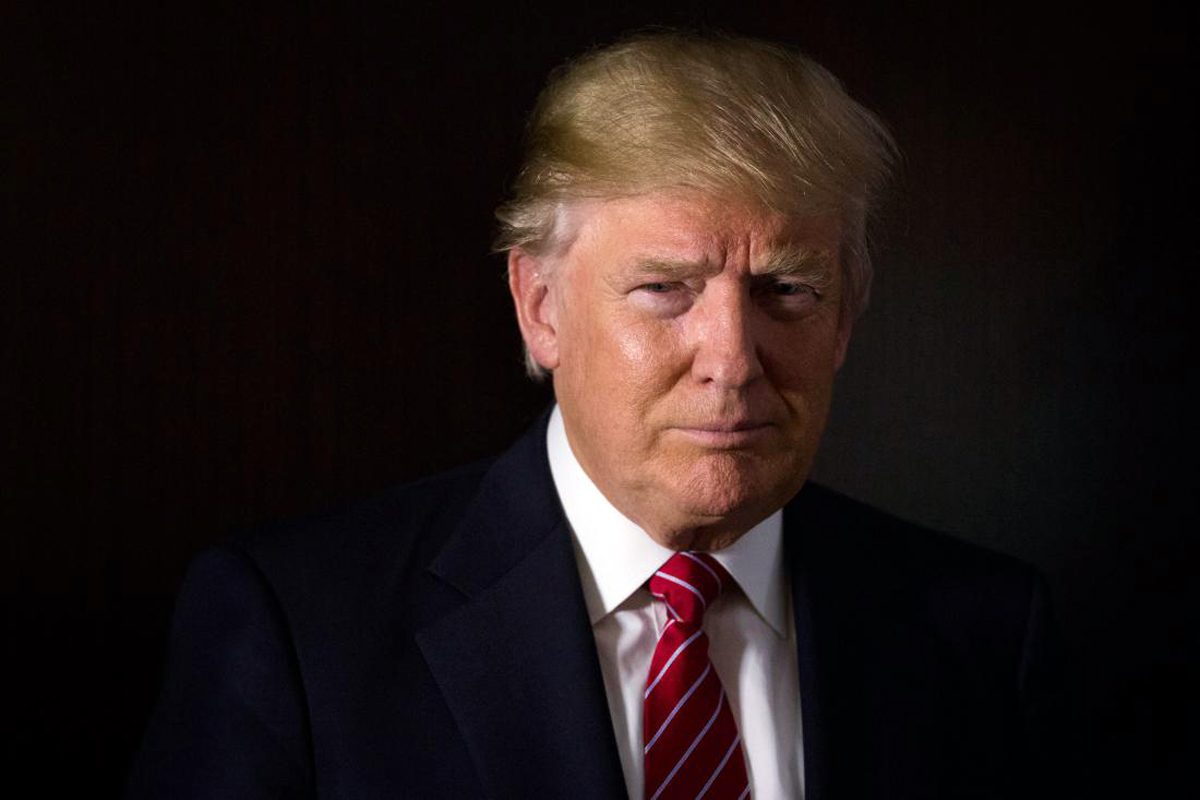 It appears that the lawless ones are the ones that can do anything illegal and uncivilized that they desire to do, be it hit you, spit on you, lie about you, blaspheme you, throw things at you, hurt you, declare for you to die or be killed by any one who will do it…while those that are civilized and can control their tempers without tantrums are the ones WITH LITTLE OR NO LEGAL RECOURSE.

The outlandish attacks are not only perpetrated by wayward citizens and bold illegals, but many of those who hold powerful seats of office are out in the streets at podiums declaring for our youth and others to go and do the abdominal acts.  Why?  These crazy loons hate President Trump and anyone who supports him. It seems if you support the President of the United States you are a target.  Well everything has its breaking point and this type of crazy outrage against others who love America, want to make her great again, and support the President is boiling over and those under attack have had enough.

All I can say is the punks and celebrity pawns who get paid to do such evil deeds have indeed been weighed and found wanting.  There is about to be a legal backlash that will put all the crazy people where they belong.  And it won’t be in the Congress halls, it will be a dimmer place with some bars on the windows.  Others will be fodder, and some just will crawl back into their basements hoping to go undetected.

Every load has a last straw and the load that has been heaped on good God fearing Americans has reached its’ final pile on!

But don’t expect a civil war, people who know how to think critically don’t make themselves targets for fools and radicals.  Watch and wait for a very well designed strategic plan…like ENFORCING THE LAWS ON THE BOOKS!  It is time and Americans are now demanding it.  Watch and see the surprised looks on the radicals who will be hauled off one by one.  That will be a joy and the day is around the corner.  There will be a few lashes here and there, but the main deal will be mass arrests and deportations where they are due, like MS 13 gangs.  Pelosi can not save herself, let alone the gangs.

Hang in there America, the Trump card is in the deck and about to be played.  Share if you agree it is time to enforce the laws of the land and stop shredding the bill of rights for everyone but the lawless ones.  It’s constitution time!